Van conversion. From scratch to home on wheels. A Camper Van "How can I make one of those?"

Professionally built or converted Camper Vans can cost a small fortune.
A handmade option is a long process but very rewarding and one of the only ways to actually put value into a vehicle.
This was the third camper conversion project that I have undertaken.
Each time they have been bigger and better!

The van I chose was a Luton style box van. I felt that this size and shape would give me the most space for a 3.5ton van which is the maximum limit for a lot of standard drivers licenses. Choosing the base vehicle was obviously a vital part becasue I predicted that a large amount of my time would be invested into the project.
It's an LDV Luton box van with a Ford Transit 2.4 turbo Diesel engine and 5 speed Gear Box.
It's a great engine that has a cam chain, not a belt, which means it doesn't need replacing.
Being a Ford engine parts are cheap and readily available.

I would advise to start with the best vehicle you can get within your budget, you're going to be in it for the long haul. 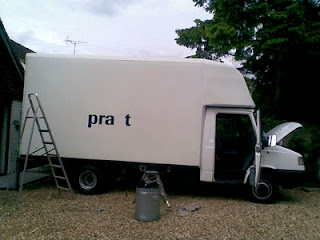 When I first picked up my van it had a rental company logo printed on the side. This was easily removed with a hot air dryer to warm the glue and a lot of patience. It read "practical" and I couldn't resist leaving a few choice letters until last. It's a Low mileage 2004 LDV with a Ford Transit 2.4tdi engine. It's a great engine in a well priced van.

All the fittings and appliances that are required for a full conversion can add up to be very expensive. For this reason I bought an old caravan. They are often advertised but I just asked around. It had a gas/ electric fridge, an oven, hob and grill unit, a sink and water system, a gas heater with external vent, not to mention the countless fixtures, fittings, materials and cables that could be salvaged. The door and windows had good seals,
with curtains to match. It was the perfect donor.
Below is a picture showing the fitting of the door.
It was scary to cut the first hole into my wall!
Have faith! 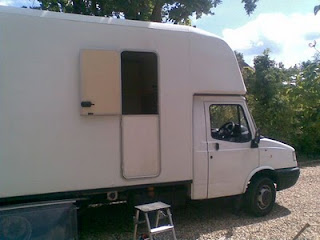 Once all the doors and windows were installed the whole van was insulated with polystyrene sheets, this was effective, cheap and readily available. The important areas like the roof, and the raised double bed were further insulated with a silver foil bubble type sheeting. The Insulation was then sealed in with light weight pine cladding.
This was a substantial chunk of the budget but it is essential to create a warm and condensation free space.
The mess below shows the building stage, almost all parts and materials used were either salvaged from the donor caravan or were recycled. Fitting the cupboards and appliances is by far the longest part of the project. I fitted a leisure battery system to give me power that was isolated from the vehicle system, this runs anything from lighting, water pumps, music, phones or laptops. I plumbed in a gas system to supply the cooker, the fridge, the heater and the hot water boiler. The system operates from two externally stored gas bottles that can be swapped over and replaced. 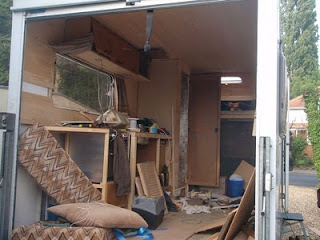 I made a permanent bed double in the front next to a shower cubicle and a
large couch that becomes a singe bed. 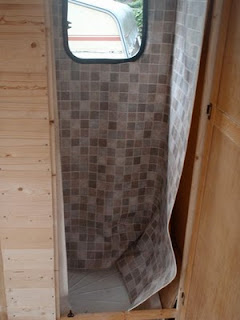 After all the structures were trimmed, appliances tweaked and cushion covers stitched the final touches and decorations were done. This was by far the most exciting stage.
At the back of the Luton box was a sliding shutter door that opens right up. I built a fake wall just behind the shutter. The idea being that whilst driving the shutter is pulled down and everything is secure and discrete but when the space is in use the shutter can be lifted to expose the door and window.
This creates an outdoor storage area for boots, brooms and tools. I like to call this little space "the garage," it's where the gas bottles live. 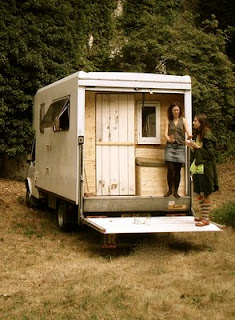 The van was envisioned as a full time live in vehicle.
Equipped with everything I could need, along with ample storage space.

There are three seats up front in the cab, all with sea belts.
Above the fixed double bed is an opening sky light that allows you to watch the stars.
The "L" shaped seating area in the van functions as a large single bed.
There's also ample floor space for a fourth camp bed if required.
At the back of the Luton box there is a sliding shutter door that opens right up.
I decided to build an insulated wall just behind the shutter.
The idea being that whilst driving the shutter is pulled down and everything is secure and discrete but when the camper is in use the shutter can be lifted to expose the lockable door and window.

This set up created an outdoor storage area for boots, brooms or tools.
I like to call this little space "the garage," out here there's a little outdoor seat under the rear window, it's where the twin Calor gas bottles live.
Behind the rear shutter is where the 500kg Hydraulic Tail lift is, this creates a verandah porch like area (as seen in the pictures.)
The future vision for the tail lift is to convert it to also serve as motorbike rack to lift a bike onto the rear of the vehicle.
The pictures below shows the inside of the fake wall with the shutter, both up and down. 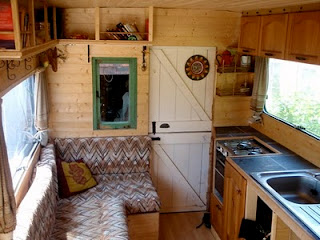 It's possible to have an ever changing view! 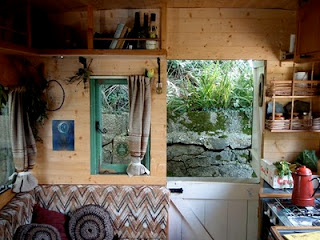 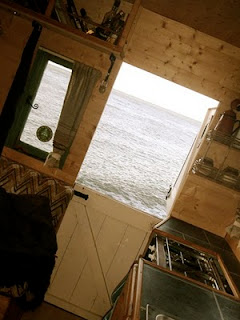 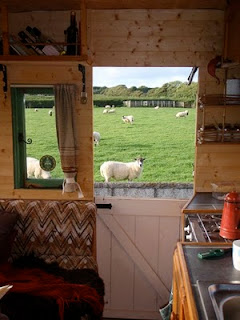 A summary:
The end result is a three birth, "live in" vehicle with plenty of space that has fantastic facilities. It's a great runner with low mileage.
A similar age and specification fitted mobile home could cost anywhere between
£20,000 and £30,000
I'll leave you with a picture of the van sneaking around in the mist! 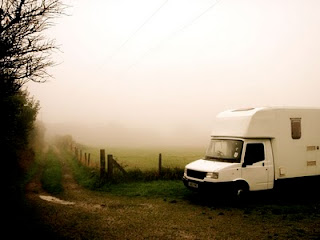